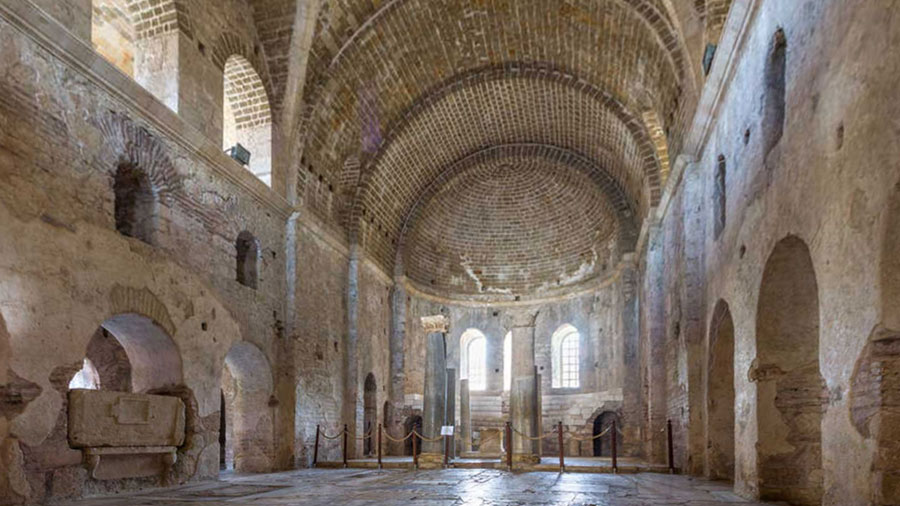 Myra is on my top-ten list of Biblical sites in Turkey. Often bypassed by groups because it is out of the way, Myra (modern Demre) is a two-hour scenic drive through the Taurus Mountains and along the Mediterranean coast from Antalya. The international airport at Antalya makes it an ideal jumping-off point for your excursion. Along the way you might want to stop at Limyra, where Austrian archaeologist Martin Seyer discovered two menorah plaques recently chronicled in Biblical Archaeology Review.1 The nearby town of Finike is noted for the best oranges in Turkey, so have a freshly squeezed glass from a roadside vendor while passing through.

Thirty minutes later—after driving along a VERY curvy coastal road—you’ll arrive in central Demre. There signs point to the Noel Baba Müzesi, that is, the Museum of St. Nicholas, whose life serves as the foundation for the Santa Claus tradition. In the late third and early fourth centuries, Nicholas was the bishop of Myra.

In the fifth century, a church dedicated to Nicholas was built in Myra, but archaeologists know little about this early phase. After an earthquake in 529 C.E., the church was repaired, and remains of this sixth-century structure are the earliest found at the site. The sixth-century church was typical of the period; it had a central nave with an apse facing east and aisles on each side. It was entered from the west via a courtyard and then a narthex. Over the centuries, the church was modified numerous times, especially from the ninth through 13th centuries.

Frescoes depicting scenes from the life of St. Nicholas adorn the church. For example, the story of the gift of the dowries—when St. Nicholas secretly provided dowries for a poor man’s three daughters by tossing bags of gold into the house through an open window at night—appears in the 12th-century grave room. The narthex also features scenes of six of the ecumenical councils held in Turkey. The floors still contain remnants of the colorful opus sectile mosaics that originally covered them.2

Pilgrims, mainly Russians, stop in the south nave to pray at a sarcophagus believed to belong to St. Nicholas. However, the sarcophagus in the grave room is a better candidate. It has two holes drilled in the top of its lid through which oil was poured to pass over the bones. This oil was then collected and distributed to pilgrims. (This custom is still practiced at the cathedral in Bari, Italy, where Nicholas’s bones were taken in 1087.) Unlike many churches in Turkey, the Church of St. Nicholas was never converted into a mosque.

While filming a video on the life of St. Nicholas in 2015, I met the Turkish archaeologists led by Dr. Sema Dogan of Hacettepe University, who are still excavating the church. Their ongoing work of preservation and restoration is challenging because tens of thousands of visitors file through the church each year. The current excavations west of the courtyard are uncovering additional rooms and crypts related to the church. To get to these areas, the excavators must dig through 10–12 feet of alluvium deposited by the Myros River over the centuries. Their work further clarifies the use of the church complex during the Byzantine period.

If you happen to be in Myra on December 6, as I was in 2016, you can participate in the annual Orthodox service celebrating St. Nicholas’s feast day. The church museum is open daily from 8 a.m. to 5 p.m. November–March, 8 a.m. to 7 p.m. April–October. The current admission cost is 20 Turkish lira (about $5).

The well-preserved Roman theater of Myra is located 1 mile north of the church at the base of Myra’s ancient acropolis. Built in the second century C.E., its capacity was 11,500 persons. Nearby are excellent examples of Lycian rock-cut tombs. The Lycian civilization flourished in this region during the first millennium B.C.E. With a columned façade, the house- and temple-style tombs are the most visible reminder of Myra’s rich culture.

From the theater, it is a short drive to the harbor where tourist boats depart regularly on Mediterranean day trips. In antiquity this was Andriake, the harbor of Myra. The apostle Paul, who was a prisoner at the time, stopped here on his journey to Rome and changed to an Alexandrian grain ship (Acts 27:5). The harbor lagoon is now silted, but the settlement has recently been excavated by a team of Turkish archaeologists led by Nevzat Çevik of Akdeniz University. In 2009, their excavations uncovered one of three ancient synagogues found in Turkey (the others are at Sardis and Priene).

Accommodations in Demre are limited to only one hotel, but 45 minutes west is the picturesque coastal town of Kas (pronounced Kash), ancient Antiphellos. Situated opposite the Greek island of Kastellorizo, Kas offers many hotels and pensions. Plan to stay a couple of nights, for Myra and its surrounding area are so archaeologically rich that it takes several days to see everything.

“Site-Seeing: The Hometown of Santa Claus” by Mark Wilson was originally published in the November/December 2017 2017 issue of Biblical Archaeology Review. It was first republished in Bible History Daily on December 4, 2017.