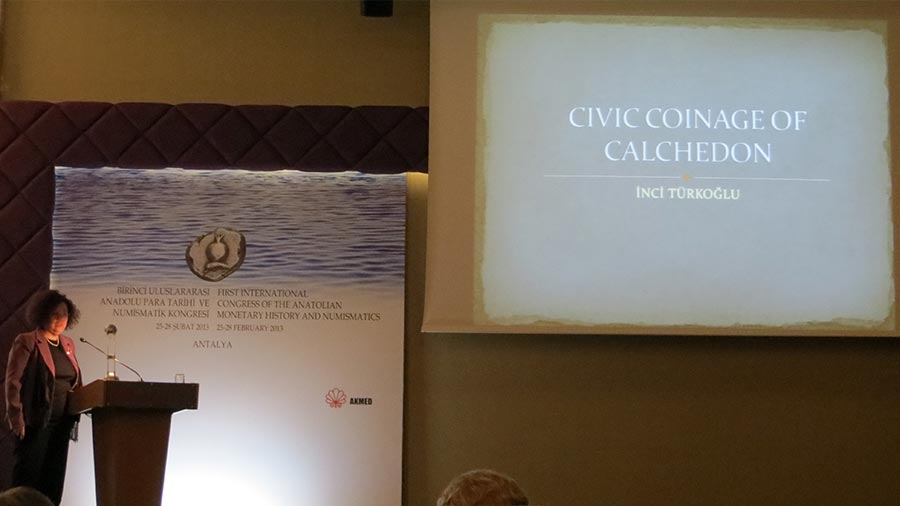 Usually I have to travel hundreds or thousands of miles to attend a conference. But recently, one was held near my office here in Antalya, Turkey, at the Ramada Plaza Hotel. Sponsored by the local Research Institute on Mediterranean Civilizations, it was titled the “First International Congress on Anatolian Monetary History and Numismatics.”

Numismatics is a unique scholarly discipline that spans archaeology, ancient history and epigraphy. It seems the axiom “money talks” is true. Much information can come from an ancient coin: the name of a king or emperor as well as his regnal titles, the names of governors or elite citizens and a city’s symbols, local gods and goddess and foundation myths. Coins are also one of the primary means of dating archaeological remains. Sealed in a stratum, they can provide conclusive evidence for the date of that level.

I was eager to learn about new discoveries and developments in the field. One of the speakers was the French authority Michel Amandry, whose work on Roman imperial coinage I had consulted during my doctoral research. In Biblical studies the field of numismatics helps to illustrate the influence of Roman imperialism. Even Jesus discussed coinage on one occasion with the Pharisees and Herodians. He asked whose image and inscription (Greek: epigraphē) was on the denarius, and they replied that it was Caesar’s (Mark 12:16).

But which Caesar was it? Numismatics has provided us with an answer. One of the congress’s speakers was Kevin Butcher, an authority on Roman Syria, who has discussed the “Jesus coin” in above video. He explains why the image on the coin could only be that of Augustus, contrary to some popular opinions. His research has shown that denarii of Tiberius, the emperor who lived during the time of Jesus, never circulated in Judea.

Something that struck me during the congress was the presentation of unprovenanced coinage sold at auctions. Various galleries and images connected to coin dealers were cited. I asked two of the numismatists at the congress about this. Readers of BHD know, some archaeological publications refuse to cite or publish unprovenanced material.* Both scholars told me that to ignore such coins would be to severely limit our understanding of ancient mints and coinage types. And they also believed that ignoring illegally excavated coins would not stem the flood of unprovenanced coinage entering the market.

In Turkey it is illegal for anyone except registered collectors to possess ancient coins. These collectors must maintain a detailed inventory that is reviewed regularly by a local museum. Because of Turkey’s numerous ancient sites, old Greek and Roman coins are frequently found, and many are collected clandestinely or sold on the antiquities market, from where they are shipped overseas. Turkish museums try to purchase ancient coins, particularly hoards, when they are found. Since most local museums display coins from the area, they usually have funds to purchase these coins. But the prices paid on the illegal market are often higher, especially when the coins are made of precious metals.

A final bonus at the congress was to see my friend, Inci Turkoğlu, give an outstanding presentation on the coins of Chalcedon, an ancient city located on the Asian side of the Bosporus in Istanbul. Numismatics is one portion of her doctoral dissertation being written on Constantinople’s sister city and the site of the Fourth Ecumenical Church Council in 451 CE. I walked away from the congress with a fresh appreciation for this specialized discipline and grateful for the contribution of these numismatists who helped me better understand the ancient world. 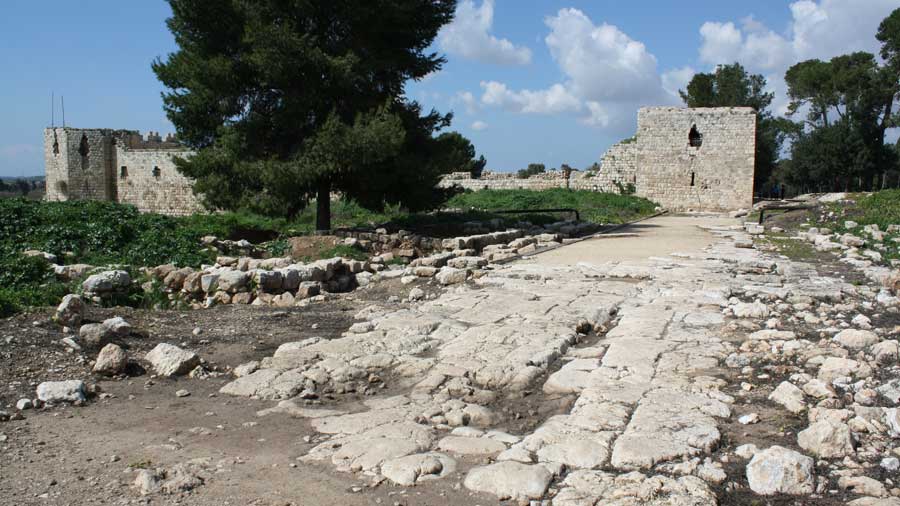 Several years ago Morgan Freeman and Jack Nicholson brought the subject of “bucket lists” to our attention via a movie by that name. In case you didn’t see it, Nicholson’s billionaire character assists Freeman’s in fulfilling a number of wishes before he “kicked the bucket.” While I have not prepared a formal bucket list, I certainly have an informal one.

One wish is to visit all the sites related to Paul in the New Testament. Living in Turkey is certainly a boon to make that happen. So far, I have visited all the Pauline places in Turkey, Italy, and mainland Greece. In Israel the only place I hadn’t visited was Antipatris. Paul made an overnight stop there while being escorted by Roman troops en route from Jerusalem to Caesarea (Acts 23:31-32).

An opportunity to visit Antipatris presented itself in late February when I was leading a tour in Israel for my Regent University students. So my wife Dindy and I flew to Tel Aviv a day early and picked up a rental car at Ben Gurion airport. Since I drive in Turkey, I figured that driving in Israel wouldn’t be much different. In fact, the drive to our hotel in Yafo (Joppa) was a piece of cake, since we arrived on Friday afternoon, the eve of Shabbat, when the roads are largely empty.

Antipatris was one of the few Pauline sites that Biblical scholar Mark Wilson had yet to visit. By standing on this Herodian Street, Mark Wilson became familiar with yet another ancient city in Paul’s world. In addition to his research, Wilson guides BAS readers through Paul’s footsteps in Turkey.

Saturday morning we set out for Antipatris, today part of a national park called Yarkon. I plotted the route on a highway map, and it didn’t look too difficult. However, in Petak Tikva we missed a turn and wandered around for an hour. Fortunately, most Israelis speak some English so periodically we got redirected. One young man marveled that I was trying to find the place without the aid of a smart phone or GPS navigation system. Well, I happen to be old school when all we had were maps, and they usually work well enough.

Down the road I saw a sign pointing to Afek. Well, I knew that Antipatris was called Aphek in the Old Testament. Here the Philistines captured the Ark of the Covenant in a great battle with the Israelites (1 Samuel 4:1-11). So, thinking we were close, I turned–only to arrive at the Afek Industrial Park. Once again we retraced our route to the main road as my wife smiled patiently from the navigator’s seat.

Soon we spotted the massive walls of the 16th century Ottoman fort perched on Tel Afek’s summit. We found many Israelis in the park relaxing amidst the lush greenery under massive eucalyptus trees. Water flowed from the springs at the source of the Yarqon River; no wonder it was called Pegae (“the springs”) in the Hellenistic period. Herod later named the city Antipatris after his father.

Excavations have exposed a few rows of an odeon as well as part of the agora. But most thrilling for me was the ability to walk on the Herodian street that led into the city. My imagination was stirred to picture Paul mounted on a horse and riding into Antipatris under the protection of 200 soldiers, 70 horsemen, and 200 spearmen. Unlike our leisurely excursion on a sunny winter afternoon, Paul’s visit was stressful as he fled for his life. However, being a Roman citizen was a good perquisite for times like this.

Later our Israeli guide told me he had never visited Antipatris with a group. Was it worth the hassle of getting lost to find this out-of-the way place? Definitely! And now my bucket list of Pauline places has one more site checked off.