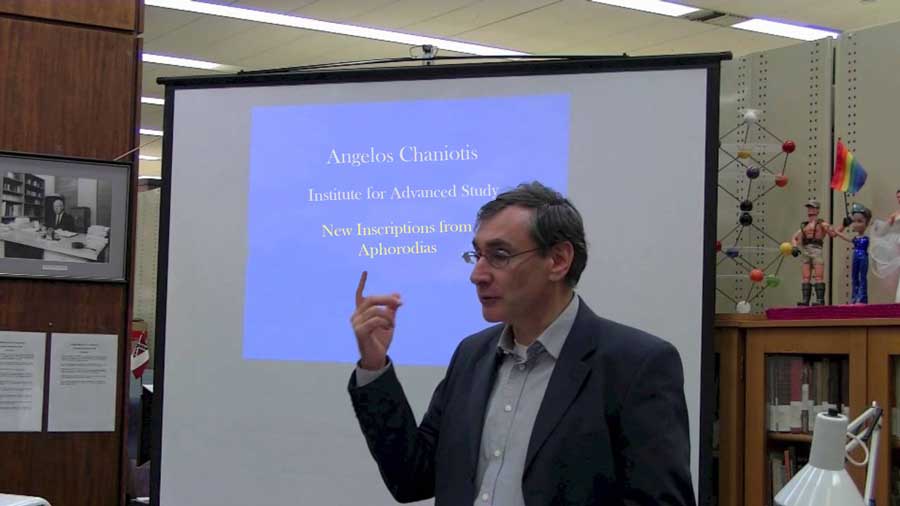 The invitation to attend the Second Greek-Turkish Symposium on Epigraphy in May was one I couldn’t turn down. It had been extended by Mustafa Adak, the chairperson of the epigraphy and ancient history department of Antalya’s Akdeniz (“Mediterranean”) University. Not only was I interested to hear the presentation of some of the thirty papers, I was also curious to see how these scholars from similar, yet politically rivaling, cultures would get along. Recent news stories highlighted the controversy over who had invented baklava—the Turks or the Greeks. And what should that thick, hot drink with grounds in the bottom of the cup be called—Greek or Turkish coffee? However, the three-day colloquium turned out to be a model of peaceful relations as the scholars set aside their nationalistic differences for the sake of epigraphy.

The symposium was held at the university’s conference hotel, set amidst the idyllic Lycian coast beneath Mount Olympos. In the first century B.C.E. the pirate Zenicetes overran the nearby ancient cities of Olympos and Phaselis and established his base there. When the Roman general Servilius Isauricus cornered the pirates in their stronghold in 77 B.C.E., Zenicetes and his followers committed collective suicide, much like the Sicarii did over a century later at Masada. So the natural and historical setting was ideal for scholarly endeavors. Another plus for me was that most of the presentations were in English.

The Roman Harbor at Phaselis on the Lycian CoastA speaker whom I particularly wanted to hear was the Greek epigrapher Angelos Chaniotis. Chaniotis had authored a recent article in Biblical Archaeology Review on the Jews and Godfearers in Aphrodisias. In his presentation, Chaniotis discussed a 2nd-3rd century C.E. funerary inscription of a young Aphrodisian woman named Melition Tatis. My ears perked up when he mentioned that she was called a parthenos in the inscription. The proper translation of this Greek word is still debated in several Biblical texts. Is the meaning in Isaiah 7:14 “virgin” (niv) or “young woman” (nrsv)? However, all translations of Matthew 1:23, which quotes the verse from Isaiah and speaks of Mary, read “virgin.” So I was intrigued whether this newly found inscription might help us understand better how parthenos was used in antiquity.

In Chaniotis’s handout, the word was translated “virgin.” But he suggested verbally that it was better understood as a class of young women. Chaniotis shared with me later that such a use was not just localized to Aphrodisias. And I learned that parthenos and its derivatives could even be a female name, probably indicating the person’s youthful appearance rather than her status of virginity or being unmarried. Chaniotis’s research has revealed that parthenos has three closely related yet distinct meanings: virgin, unmarried, and young/unmarriageable. While it may not always be possible to distinguish among them, an awareness of this difference can help us better understand Biblical texts. For example, the niv and nrsv both use “unmarried” in Acts 21:9 to designate Philip’s daughters, a better translation of parthenos than “virgin.” Listening to Chaniotis, I was reminded again of the importance of context in translating and interpreting Greek words.

This intercultural scholarly gathering was a great success. All agreed that a third Greek-Turkish epigraphy symposium should occur. However, a date could not be set because Greece’s economic situation may preclude its scholars from hosting one in the near future. So hopefully a sponsor will be found. Nevertheless, I look forward to colloquiate again with these epigraphers and to drink some more Turkish (or is it Greek) coffee?